Strong build for Ruby, by “Liith”. There is good gear choose for durability and damage, you can survive the long team fights so protect your team members, Ruby!

For obvious reasons, due to its higher lifesteal effect compared to Fallen Sword and Endless Battle, also instead of getting boots first for Ruby, getting this Gear is more important as it lets her lifesteal from minion waves, so she doesn’t have to recall that often. 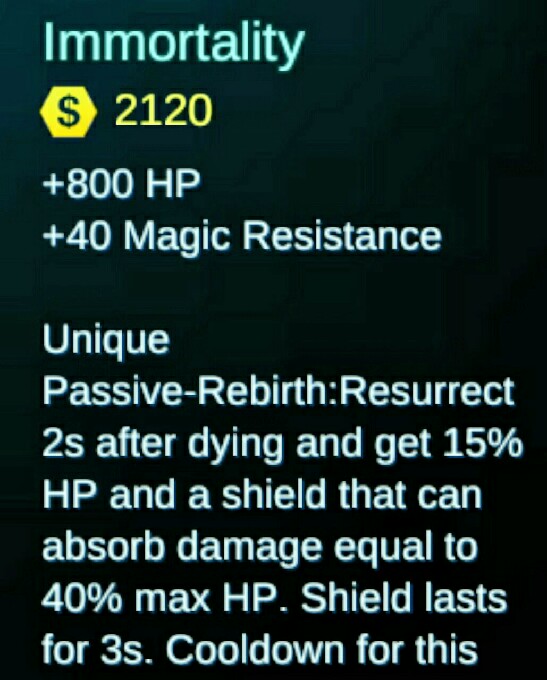 Ruby dies easily as she doesn’t have lifesteal from basic attacks, so Immortality is a must to help her stay alive

For its additional 20% Cooldown Reduction

For 1550 HP as well as its Unique Passive where it heals 20% of max HP after every Kill/Assist, helps you stay alive throughout a team fight

I am building Ruby as a Fighter, not a Tank. I don’t use Full Damage on Ruby cuz her damage output is not that high and she dies rather easily. Therefore, I play Ruby as an Initiator, diving the enemy and initiating a fight, CC-ing them while the rest of my team comes in and deals damage.

Cooldown Reduction is extremely important for Ruby as it allows her to Stun the enemies more often and Lifesteal more often. The cap for CDR is 40%, therefore I use Dominance Ice (20%) and Hunter Strike (20%) for 40% CDR.

For the boots, I use Magic Shoes if enemy’s damage output is not that high, giving me an early game 10% CDR, however, once I reach late game, I swap out Magic Shoes for either Warrior Boots or Tough Boots, depending on the enemy composition. Since Magic Shoes (10%) + Dominance Ice (20%) + Hunter Strike (20%) will give me 50% in total, but the cap is 40%, having Magic Shoes in late game is pretty useless.

Of course, this is only one way of building Ruby, one that suits my play style. Some people prefer using Ruby as a full on Tank, and that could work too since she has a lot of CC, and Tanks don’t depend on lifesteal to stay alive, instead relying on High HP, Armor, Magic Resistance to survive through a team fight. However, I’m not familiar with using Ruby as a Tank. So, here you go, do explore it yourself and maybe you can come up with a more suitable build based on your playstyle.

How to Play Ruby

I play Ruby as a Assist Fighter. Early game, I usually pair up with someone who has high damage output, and go either bottom lane or top lane. This is because I can control the enemies, while my partner can deal the damage. However, when playing Ruby, don’t be too aggressive with her early game, since she is rather easy to take down, due to her basic attacks not having lifesteal. Once you have Immortality, then you can be much more aggressive.

Try to go with either a Marksman, or another Fighter that can deal burst damage, eg: Alpha, Freya, maybe a High damage Mage like Kagura or Eudora, basically anyone with high damage, since it is quite difficult for you to deal tonnes of damage to an enemy.

Give it a try and tell me what you think of this build. You can change it up to suit your play style, never be too afraid to experiment!

Ruby is a good cc. Use her wisely! I use the stun spell with ruby to get more cc power. Try it boys!

My sister uses ruby as assist fighter using Stun and more on Lifesteal items plus immortality and magical booths. She survive the whole game.

Ruby is one of the different hero at game, yeah survive the whole game… Thank you for commenting 🙂

I’ve had 20 mvps with ruby and i use execute to strengthen her damage. her second skill is good for escaping enemies to stun them.

I personally prefer taking Flicker just so I can land those long hook + stun plays to set up the team fights. It also is very useful in chasing enemies or getting out of a bad situation. I also like building Crazed Reaper as it allows me to stay with the enemy. The Attack Speed stat increase that it gives you is very synergistic with its armor shred passive which allows your teammates to deal more damage as well. Have fun playing! 🙂 (Currently GM2 climbing to epic)

I really like the Bloodthirsty King item buy though, I think it goes perfectly with her kit and gives her more survivability since she often dives enemy teams to engage fights.

as for me, i use her as semi attacker.. 1. hunter strike (increase base damage) 2. magic shoes (reduce cooldown) 3. dominance ice (reduce cooldown + slow) 4. magic blade ( shield for escape or trick your enemy by sparring till backup come) 5. tooth of greed (for more durability in every skill) 6. bloodthirsty king (more durability) so far this build has save me a lot especially those magic blade.. people tend to stop chasing when they see a shield come out.. even if they still chase, i have time to spam skill while jumping back and get lots… Read more »